Social media and new technologies have taken the world by storm in the last decade. It is now impossible to imagine an industry that has not been directly impacted by this phenomenon, including sports.

Since the rise of social media, sports have become more accessible and widespread. Fans can get the most updated sports results, news and content instantaneously, follow their teams and athletes and engage with other fans. Social media, therefore, has proven not only to be a helpful and important tool for sports, but also an extension of the pitch.

Nowadays teams have their own social media accounts that offer behind-the-scenes access to the players and the club etc giving fans a closer experience and a sense of proximity not only to their team, but also with fellow fans. Match days now begin hours before the game with the build up in social media. These digital platforms provide information on statistics, pre-match analysis, the odds of winning, the arrival of the teams, warm ups, lineups etc. Instant sharing of this information contributes to fan excitement and improves the overall experience, proving more than ever that social media is a fundamental part of any match day.

This extension of the pitch is not only promoted by the teams, but also by athletes creating content. Social media offers players a platform to open up about their daily lives, careers, values and personal brands. Despite the many benefits this can bring to sport, some players may have a poor notion of how to use social media appropriately. Misuse of social media can lead to reputation damage, disciplinary actions, fines, and suspensions and in some serious cases, it can cost an athlete their career. What happens outside the field can influence the game.

For example, in the UEFA Champions League Round of 16, second leg match between Paris Saint-Germain and Manchester United FC, played on 6th March 2019, Neymar Júnior posted on his Instagram account about the use of VAR, criticising the referee. UEFA opened a disciplinary proceeding and charged him with insulting/molesting acts against a match official under Art. 15 (1) (d) of the UEFA Disciplinary Regulations, suspending him for three UEFA competition matches. It is important to note that Neymar did not participate in the match and was not even included as part of the squad, as he was injured. However, this comment regarding the game made on his own social media account affected him and his team. This is the perfect example of social media directly impacting the game itself. Even more so, in the recent amendment of the FIFA disciplinary code, FIFA has decided to sanction conducts like unsporting behavior towards an opponent, provoking spectators at a match, unsporting behavior towards a match official and intimidating and threatening a match official regardless of the fact that the offense has been committed off the field of play and even references “via social networks”. 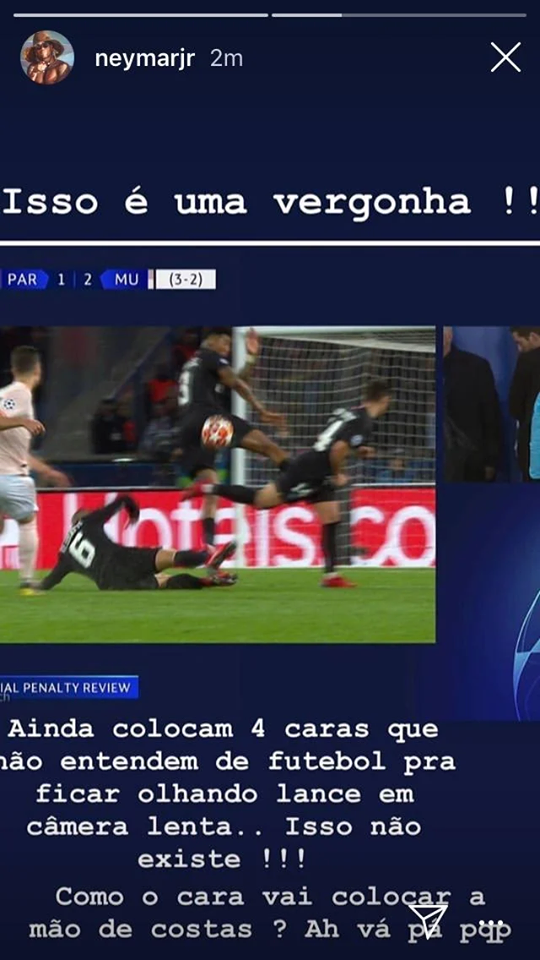 “This is a shame. They put 4 guys who do not understand football to be watching in slow motion. This is surreal. How will the guy put his hand on his back? Oh f*ck off.”

Due to the huge impact social media has on sport, misuse of social media and the consequences it carries is a key topic of conversation for clubs, federations and sponsors. Some players have more followers themselves than the club they play for and they have become media brands in their own right. Perhaps social media could be regulated?

Social media seems to have been brought under the fold of the workplace. Over the years, there has been a tendency for professionalization of social media. It is common for player’s social media accounts to be part of their job obligations and to be liable to their employers, sponsors and their federations for misuse of such. What’s more, negotiations around sponsorship and endorsement deals focus on the social reach a player has and their “market”. However, sponsorship deals are the first to be affected when an athlete misbehaves. Because of this, including morality clauses in employment and endorsement contracts, i.e. a clause that “prohibits” or penalizes certain behavior on athlete’s private life that can affect the image or bring it to disrepute, has been a growing tendency in the past few years.

Some athletes may claim that they are the owner of their social media channels and that they can use them as they wish. The reality is a little different. The reach social media has and the fact that athletes can be considered public figures means that a photo or message an athlete posts is shared instantly into the public domain, which can sometimes be a positive. Because of this athletes may have implicitly accepted not only professional or economical responsibility, but also social and ethical responsibility for the messages they convey. This opens the debate about social media as a personal and private space. While it is true that social media accounts are not a “private space” anymore, athletes do have ownership of their intellectual property and their image.

In sum, there is absolutely no doubt of the impact that social media has had on sports, not only on sport fans and athletes, but also on teams. According to KPMG there is a clear correlation between a club’s social media presence, on-pitch success and brand value. Some teams have even developed documentaries through streaming and OTT services such as Netflix and Amazon Prime. This has not only captivated the existing fans, but has awoken the interest of new fans, for example the Formula 1 series on Netflix “Drive to Survive”. Social media has truly elevated the worldwide status of sports.  The benefits of social media are plentiful and they improve the sports’ experience giving fans a sense of proximity, even if they live miles away or in another country from their team. Despite the many benefits, there are still some negatives. For example, negative content can spread more quickly than ever before; negative comments from fans could affect the performance of the athletes or the team and misuse of these channels can lead to disciplinary and monetary fines for athletes and teams. However, social media is here to stay and it is the industry’s challenge to make the best out of these platforms, despite all the legal, commercial and social obstacles they may bring.

One thought on “Social Media in Sports”