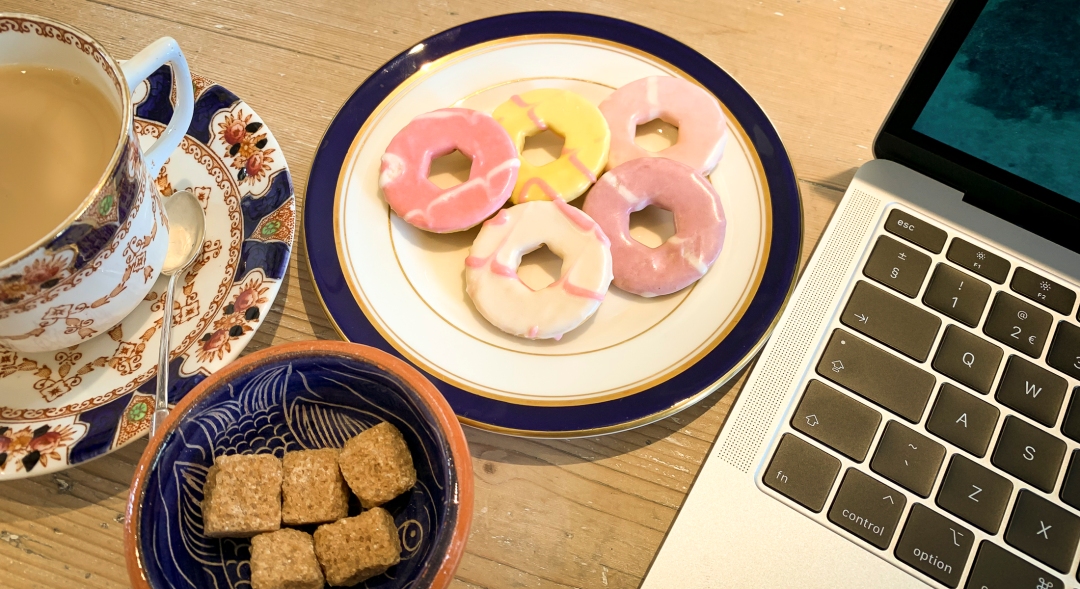 Ambush marketing is incredible. What’s better is that when done properly, ambushers don’t need to break any laws to get a positive result.

So what is Ambush Marketing and where does it come from?

The International Olympic Committee (IOC) has zealously guarded its trademarks for decades, but if there was one tipping point, it happened 23 years ago, during the 1996 Summer Olympics in Atlanta.  On July 29, 1996, two pieces of history were made, both the athletic and marketing kind.  That afternoon, sprinter Michael Johnson won gold in the 400m dash after finishing in 43.49 seconds. Tall, muscular and graceful, Johnson blew past his competitors as though they were standing still.  Adding to the mesmerizing effect of his grace were the gold-colored shoes that Johnson wore, a $30,000 pair of lightweight racing spikes given to him by Nike.  Not only did millions of television viewers see those Nike shoes on their screens, millions of Americans saw those same shoes slung around Johnson’s neck a few days later on the cover of Time Magazine.

It’s hard to imagine a more successful piece of marketing for any Olympic sponsor; except for one small problem: Nike wasn’t an Olympic sponsor.  Instead of paying for an official sponsorship, Nike decided it could advertise the brand in the 1996 games in other ways, and Johnson’s gold shoes were just the beginning.  The brand opened an outsized “Nike Centre” right beside the athletes’ village.  Nike also distributed flags to fans, guaranteeing that its “swoosh” logo would be in full view all over the property.  These tactics infuriated Reebok, who had paid a reported $50 million to become an official sponsor.  What Nike did in Atlanta 1996 directly resulted in the much more stringent guidelines that both the IOC and the United States Olympic Committee (USOC) have today. In this instance Nike ambushed the event but there are three main types of ambush marketing:

So what’s the law?

Imagine an American business tweeting “Congratulations to Usain Bolt for winning gold in the 100m at Rio 2016!” Sounds legit? Don’t do it! I promise you it’s not worth it!

Marketers have learned that the United States Olympic Committee (USOC) has ironclad regulations, backed by US trademark law. These laws prevent non-sponsor brands from saying anything even vaguely resembling or evoking the Olympics. For example, at London 2012 the words Games, Two Thousand and Twelve, 2012 or Twenty twelve cannot be used together or in conjunction with Gold, Silver, Bronze, London, Medals, Sponsor or Summer under s.33 and schedule 4 of the London Olympic Games & Paralympic Games Act 2006. So yes, even saying London 2012 as I just did breaks the rules…oops.

The biggest barrier, imposed by the IOC is Rule 40, bye-law paragraph 3 of the Olympic Charter whichstates that,“except as permitted by the IOC Executive Board, no competitor, coach, trainer or official who participates in the Olympic Games may allow his person, name, picture or sports performances to be used for advertising purposes during the Olympic Games”. Basically, it bans advertisers from using the names or images of Olympic participants during the games unless the advertiser is an Olympic sponsor, which can costas much as $100 million. Even a standard 30 second television ad (without superstar athletes) costs around $96,000.

These high costs are exactly why this type of ambush marketingwas born; as a way for clever, risky and adventurous companies to circumvent these rules and costs, while still latching on to the bright, burning flame of the Olympic torch.  Here are some other “Olympic-sized” ambush campaigns that have managed to win attention and customers through their cleverness and audacity.

Budweiser featured Wayne Gretzky and other hockey legends breathlessly watching a championship hockey game in its’ “Let It Shine” ad campaign for the 2018 PyeongChang Winter Olympics. Everyone erupts in cheers when the home team scores the winning goal.  Before the final score, bar staff are putting gold, medal-shaped coasters on beer glasses, a subliminal link to the gold medal? The brilliance of the ad is that it doesn’t reference the Olympics even once. Yet the gold lighting, the gold lanterns held by the fans, the gold beer coasters, the ecstatic fans and the end caption “Bring It Home” all bring back memoriesof the legendary Olympic victory of the 1980 U.S. Hockey Team.

PyeonChang athletes have unwittingly been the focus of ambush campaigns.  For example, superstar snowboarder Shaun White, who won his third gold medal at the PyeongChang games, was featured on a series of Times Square billboards advertising Targetduring the 2010 Vancouver Winter Olympics.  Not being an Olympic sponsor, Target got around Rule 40 restrictions by posting the billboards before the games began.  By the day of the opening ceremony, Target altered the billboard by changing the image of White into a silhouette, accompanied by the message “Gone to Vancouver.” 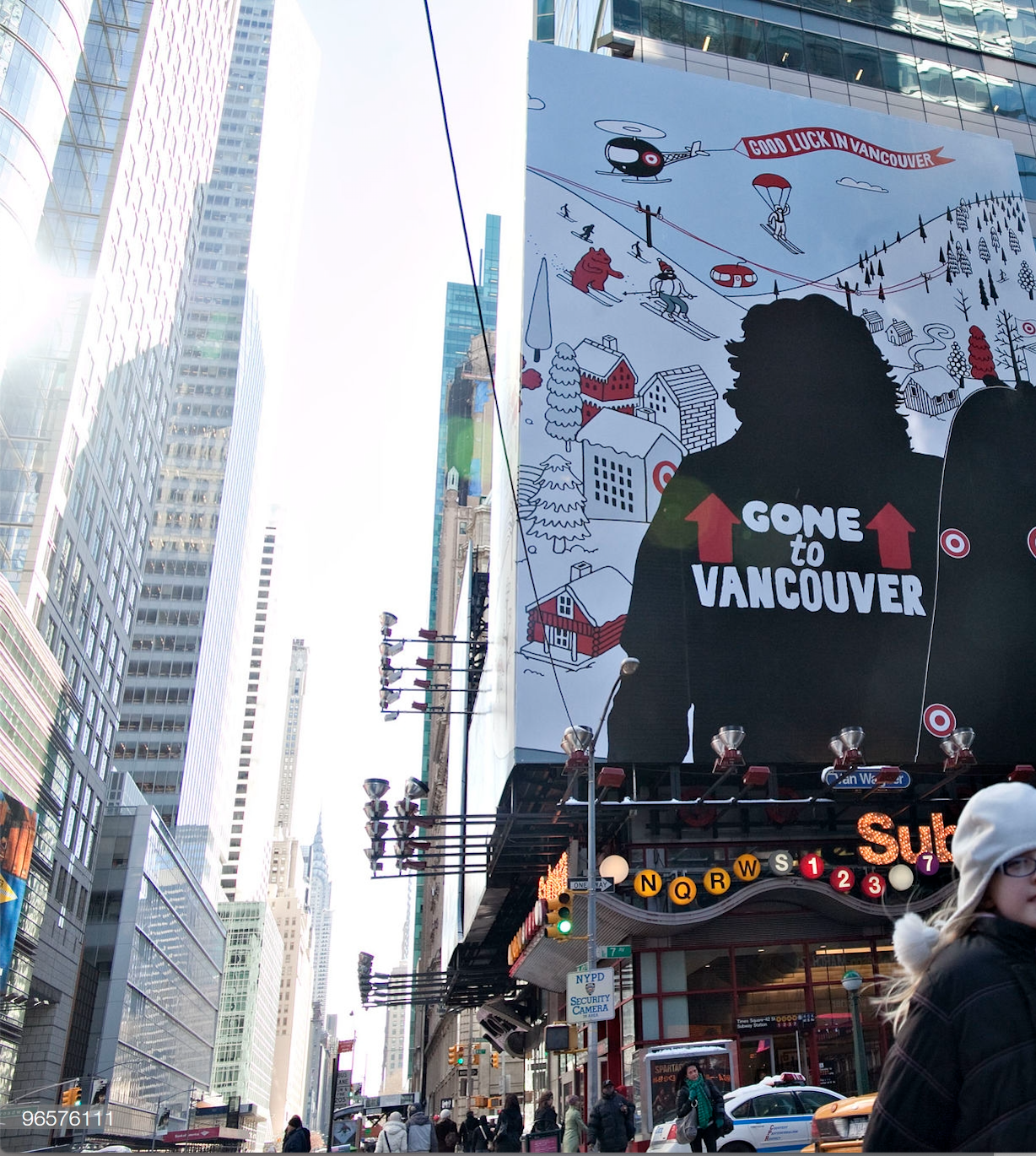 No newcomer to ambush marketing, Dr. Dre crashed the 2012 Summer Olympics in London with an amazing ambush tactic: product placement.  The company sent special versions of their headphones to high-profile athletes; each set decorated with the athlete’s home flag.  Superstars such as U.S. swimmer Michael Phelps and British diver Tom Daley were seen (by millions of television viewers) sporting the headphones immediately before their events.  Several athletes even brought social media marketing into the mix by tweeting about them.  This high-profile product placement at the London games motivated consumers and companies worldwide to search online for the headphones. 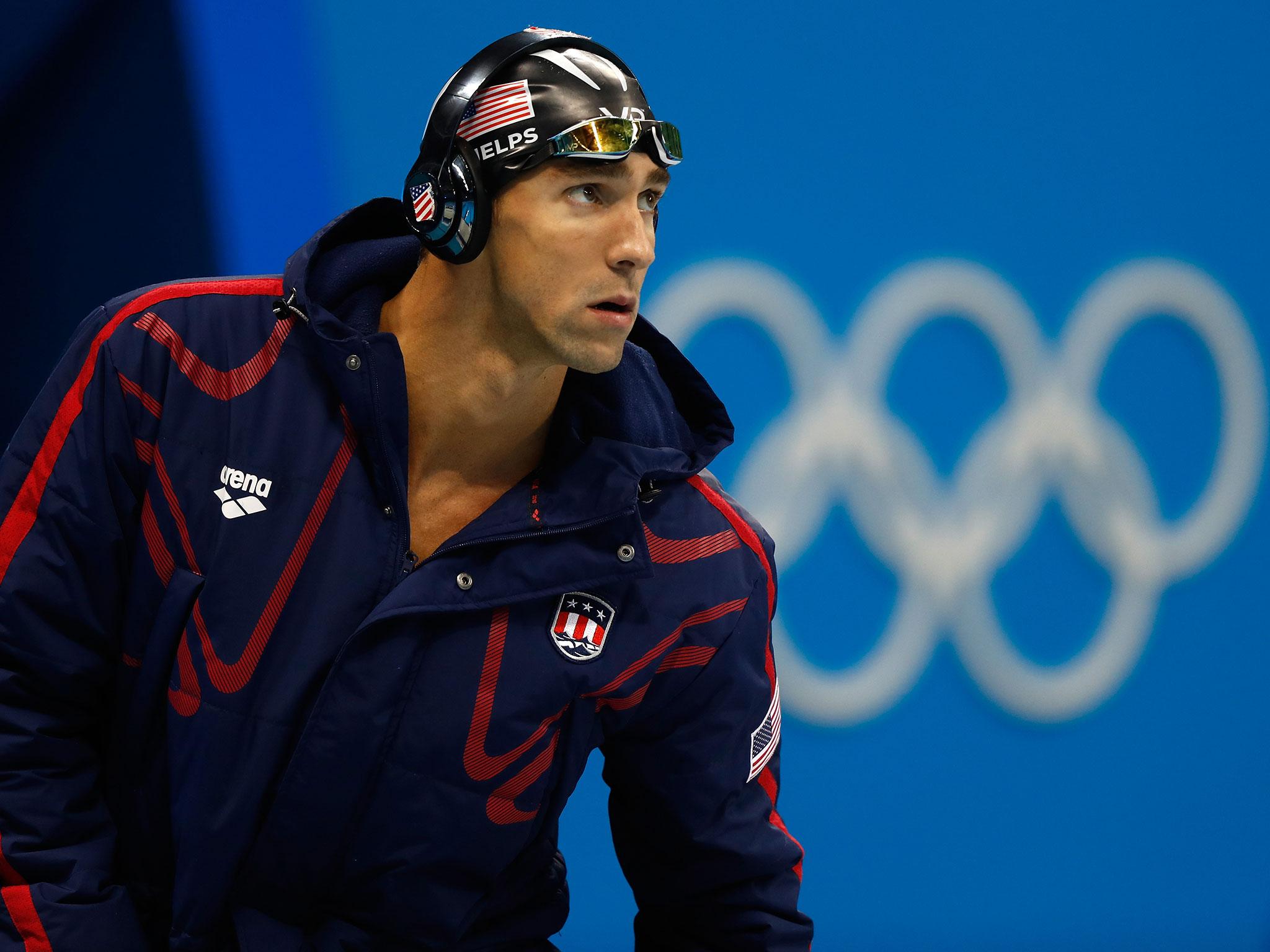 Nike ambushed the 2014 Brazil World Cup by releasing an advert just before the tournament that referenced the players in Brazil leading everyone to believe they were involved with the competition despite Addidas being the official sponsors.

Unless claiming, or giving the impression, that the advertiser has an official link with the event, it is very difficult to prove illegality. Paddy Power circumvented the laws by sponsoring an egg and spoon race in a small pub in London, France. 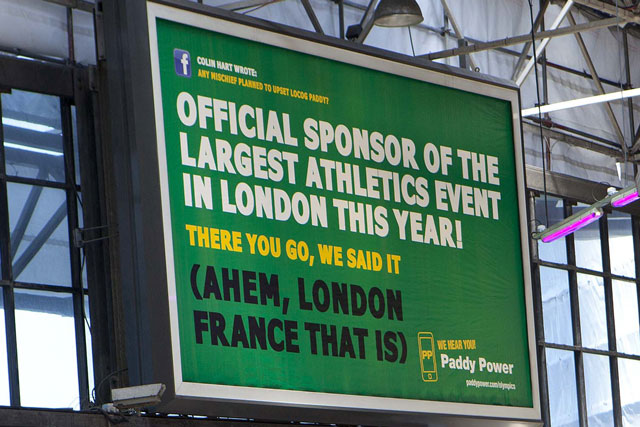 Bruno Banani was a Tongan luger who was competing to be a part of the 2014 Sochi Olympic Games. Stranglely enough he had the same name as his sponsor a german underwear company. Yes… he really did change his name as part of a marketing hoax…

Ultimately Ambush marketing isn’t for everyone; it can actually lead companies into trouble.  When it’s done the right way, however, companies can utilize this strategy to reach millions of new customers and bring home “advertising gold”. If used correctly, brands can cash in and win big in these “marketing games”.

4 thoughts on “Ambush Marketing in Sports”