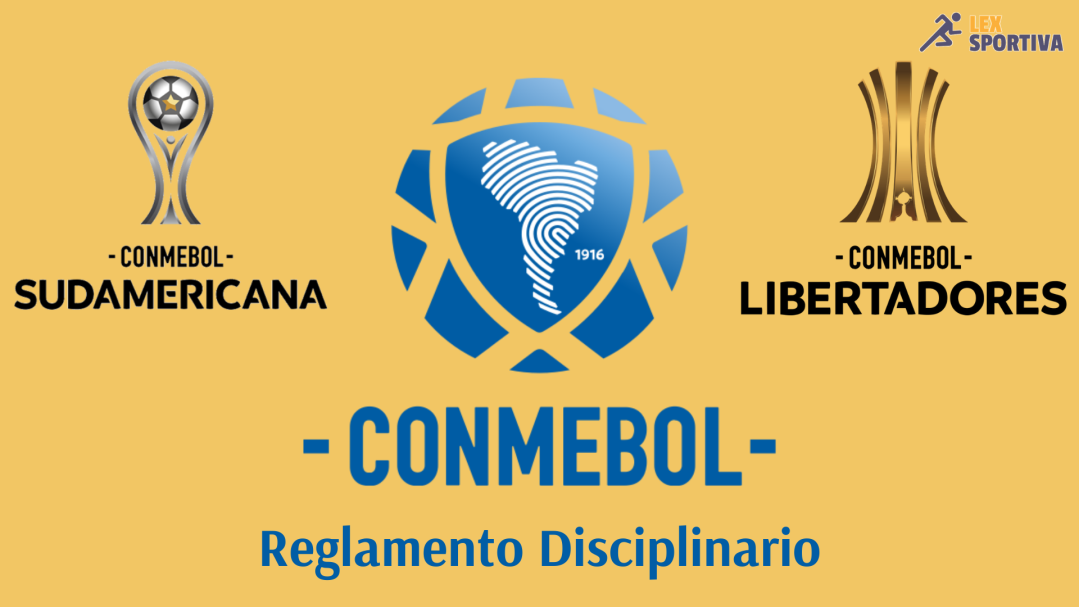 CONMEBOL published their new Disciplinary Code on 1st January 2020, which introduces new articles that help clarify and harmonise the regulations. This new Code excluded a few provisions and kept the same structure as the previous one, but with a new structure for the sake of more fluid reading.

In my opinion, the most significant changes to the Disciplinary Code are:

This new Code begins with the definition of the rules from CONMEBOL, FIFA and IFAB, and uses them as guidelines to develop an understanding of the status, bylaws, and circulars of CONMEBOL.

The new article 5 has added that all disciplinary proceedings shall continue even when the athlete or club is no longer under CONMEBOL scope.

In order to pursue this, CONMEBOL included possible disciplinary measures to be imposed on athletes or clubs such as warnings, fines, prize returns and title withdrawals. Those are now separated in two different groups:

Within Article 8, CONMEBOL define the meaning of sanctions and orders given by judicial bodies.  Sanctions are the “resolutions for the offenders”, whilst orders are “instructions for a certain behaviour”.

In addition to the joint liabiliy that CONMEBOL has established for fines, Article 9 includes strict liability on clubs and associations for acts of players, coaches, officers, members, staff, public or any other person that could be involved on a match. For CONMEBOL, all the infractions will be sanctioned, whether intentional or not. Infraction attempts are also included in this definition.

This Article 9 seeks to make clubs and associations responsible for whatever happens in a match, whether it is within the stadium or in the surrounding areas; before, during and after the match.

On the next article in the new Code (Article 10), CONMEBOL requests that clubs and associations evaluate the risks of every match and stipulates that the ones with more risk must fulfil all security measures to secure the spectacle and collaborate with national security.

In the event of not fulfilling CONMEBOL’s requests, any of the sanctions mentioned may be imposed on clubs and associations for the following acts:

In Article 11, CONMEBOL considers that all referee decisions are final and will not be reviewed by CONMEBOL judicial bodies.  The only exception is where a referee decision has a legal consequence on the identification of the offender. In the event of an unsanctioned offensive gesture, CONMEBOL will apply the principle of pro competition.

This article 12 has also modified letter “q” to add: “attend to judicial tribunal, except cases established by the law, CONMEBOL and FIFA.

Article 16 has added that the suspension for assaulting an authorised officer ranges from 10 matches to 6 months.  On the specific number of match suspensions, only a “match officially played” counts.

This new Code includes sanctions for players who incite violence on their personal social media.

Following indications of FIFA, CONMEBOL has included, within Article 17, the definition of “discrimination”. Discrimination occurs when any person or official offends against the dignity of another person in any way, for the color of their skin, race, sex or sexual orientation will be suspended from a minimum of 5 matches or a period of time of no less than 2 months.  Clubs and associations shall be fined with a minimum of fifteen hundred US dollars ($1500) if their supporters, or general public, perform acts of discrimination.

CONMEBOL has included in article 22 new provisions to sanction doping according to CONMEBOL’s Anti-Doping rules.

Match-fixing is another new article on the latest Disciplinary Code from CONMEBOL, which tries to fit with FIFA’s provision.  Any person who attempts to influence, directly or indirectly, the result of a match or competition will be prohibited against any activity related to football for a minimum of 2 years.  If this person is a football player acting for a club, the club will immediately lose the match and could be excluded from the competition.  CONMEBOL requests, in the same article, the support of every association, or related person, on the fight against match-fixing or match manipulation.

This new Disciplinary Code will protect football in South America and develop a better understanding of the FIFA Disciplinary Code and national laws, as well as providing better harmonisation among them. It is very important to encompass all acts that could threaten competitions, such as doping, discrimination and match-fixing. Only in that way can we have positive change in South American football.

With member associations and clubs abiding by CONMEBOL rules, we will begin to see changes in the structure of South American football as a whole.

Santiago J. Zambrano is a qualified lawyer of international and domestic sports law. He is the founder of Conlegal Sports, a specialised sports law firm in Guayaquil-Ecuador.

Enjoyed this? Here’s something similar…